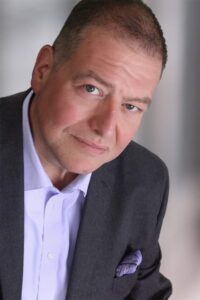 Frank E. Pitts is an American bass known for his distinctive, booming voice and consummate musicianship. He has directed multiple ensembles and is thrilled to take on the role of Artistic Director/Conductor of SingOut Detroit. In addition to leading choirs, Frank keeps a busy schedule as a performer as well, singing the role of Simone in Michigan Opera Theater’s 2020 double-bill production of Gianni Schicchi/Buoso’s Ghost, Opera News praised him stating “Frank Pitts’ big, resonant bass lent appropriate gravitas to cousin Simone and anchored the men’s ensemble…”

Most recently, Mr. Pitts performed to enthusiastic response and acclaim as bass soloist with the Fresno Master Chorale in Mozart’s Requiem. The Munro Review stated “My favorite soloists: Frank Pitts’ powerful bass presence boomed through the Shaghoian.” In 2019, his predominant focuses were his performances as The Commendatore in Don Giovanni and Reverend Hale in The Crucible, all with the prestigious Berlin Opera Academy in Germany.

Having performed numerous times as featured solo artist with the Flint Symphony Orchestra, Mr. Pitts’ basso profundo was especially noteworthy in Ralph Vaughan Williams’ Serenade to Music with Teatro Colon’s Maestro Enrique Demieck. He is scheduled to sing with the FSO again in May of 2023 as a guest artist for their performance of Beethoven’s Ninth Symphony.  While participating in the renowned AIMS program in Graz, Austria, Mr. Pitts performed as bass soloist in Rossini’s Stabat Mater. Other favored oratorio works to his credit include the Mozart Requiem, Hayden’s Creation and Handel’s Messiah.

Equally successful in both opera and musical theater, Mr. Pitts has performed roles ranging from Don Bartolo in The Barber of Seville and Pooh-Bah in The Mikado to Pulitzer in Newsies and Edna Turnblad in Hairspray. Frank resides in Flint Michigan.  He and his wife Terry (deceased) have 3 sons and 4 beautiful grandchildren.  He enjoys cooking and travel and spending time with family and friends.