Greetings from a returning Sing Out Detroit Chorus member

Greetings from a returning Sing Out Detroit member

Hi, my name is Michelle Mormul and I have sung in choirs since elementary school. In high school, I sang with the Choraleers, an elite jazz choir in Westminster, California where we won a contest judged by Richard Carpenter of The Carpenters. He mentioned that our intonation was superb and I have carried this grounding with me ever since. While working on my undergraduate degree in international business with a concentration in French at California State Fullerton, I was given a great opportunity of opera training in a Lyric Theatre Workshop at Orange Coast College with a laryngologist named Carol Chardonnay where the fortunate students were given a half hour of private vocal lessons and a half hour accompaniment session per week. After college when I came out, I sang with Vox Femina Los Angeles, an all-women’s choir, for a year before moving to Delaware. I then chose another women’s choir, Anna Crusis, in Philadelphia for three years. After finishing a Ph.D. in history, I was with the Rainbow Chorale of Delaware from fall 2011 to 2015. I helped out on the Production Committee for three years, and then was voted onto the board as co-treasurer for my last year in Delaware. I would like to go to GALA again and plan on organizing a Metro-Detroit group to attend in 2020.

After spending fifteen years in retail, six of those in retail management, I decided to continue my education in the field of history, creating a career out of one of my sources of pleasure. Attending historical conferences confirmed my devotion to the profession of history. After graduating in January 2002 with a graduate degree in history from CSUF, I moved to Delaware for a Ph.D. in the history of trade and commerce for the colonial era and in 2010 finished my dissertation, “The Linen and Flaxseed Trade of Philadelphia, 1765 to 1815.” I am currently working on a historical fiction book, The Adventures of Betsey Buck. It is about the wife of one of the linen merchants who worked out of the port of Philadelphia. She lived from about 1776 to 1834 and traveled across the Atlantic with her husband during the Napoleonic Wars. I am also writing for an encyclopedia and about to teach my first online class: US Women’s History in the fall of 2016.

I took care of my mother with dementia for ten years and she passed just before I joined Sing Out Detroit Chorus. This has been a very welcoming family here, just like the Rainbow Chorale of Delaware was on the east coast. When I am not singing in Sing Out Detroit Chorus in Ferndale, or One Voice in Birmingham, I spend my time kayaking and poking around in the garden. 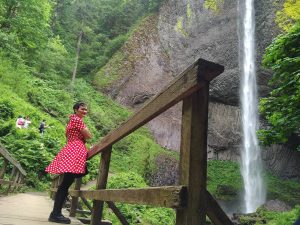 We Rehearse Tuesday nights at the St. John’s Episcopal Church in Royal Oak, Michigan from 7-9pm. If you’re interested in joining the choir contact us here. or call 248-943-2411